Spectators witnessed some very exciting matches over the 4-day period starting on Friday October 27 and culminating with the finals played on Monday 30th with the bulk of the prize-money shared by South Australia’s top seeded Darren Polkinghorne in the men’s singles and Canberra’s Tallulah Farrow in the ladies singles and doubles events. At only 16 years of age she defeated many ladies of higher ranking along the way.

The Men’s doubles was won by Corey Clarke from Forster and James Ibrahim from Sydney and Chloe Costelloe, the highest ranked lady and Melissa Anderson from Sydney took out the Ladies doubles title.

It was great to see local players Ryan Murphy, Riley White, Natasha Phillips-Edgar, Brock Pearse and Shaylee Sydenham playing at this level of tennis in their home environment with lots of support from other club members. They can only benefit from this experience.

On Saturday evening amid all of the intensity of the competition the players get to relax, have fun, show their talent in an amusing way and win some cash, thanks to Karen and Tony from South Coast Business and Financial Solutions in Boree Street Ulladulla. The Dash For Cash has been a popular event since the first SPO in 2008 and still brings players back to Ulladulla just to join in the hilarious antics and let their hair down.

We were privileged to have a visit from the Chief Executive Officer of Tennis NSW, Mr Lawrence Robertson, on Sunday. He was here on a fact finding mission to assess our facilities and our handling of the tournament. Not surprisingly he was suitably impressed with all aspects and we passed with flying colours.

An event like this involves a lot of work, mostly by our volunteers in preparing the courts, supervising the play, the ball kids who did a superb job, as well as the workers in the canteen and those who donated cakes and looked after our sponsors. The efficiency and competence of the paid officials as well as the volunteers ensures the tournament’s success year after year.

However without the sponsorship and support of BIG4 Bungalow Park on Burrill Lake, South Coast Business and Financial Solutions, Baker’s Delight Ulladulla, Bendigo Bank Milton and Sussex Inlet and the Ulladulla Fishermen’s co-op who provide ice we couldn’t do it.

A huge thank you to all of the volunteers, officials, sponsors and local businesses for their support and a special thank you to the spectators who came along and really added to the atmosphere. 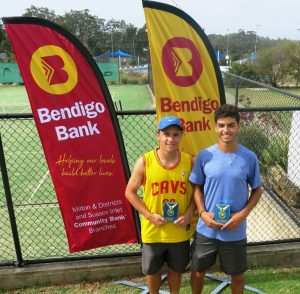 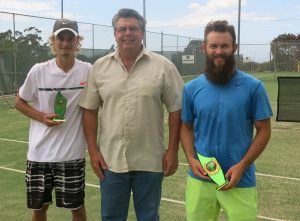