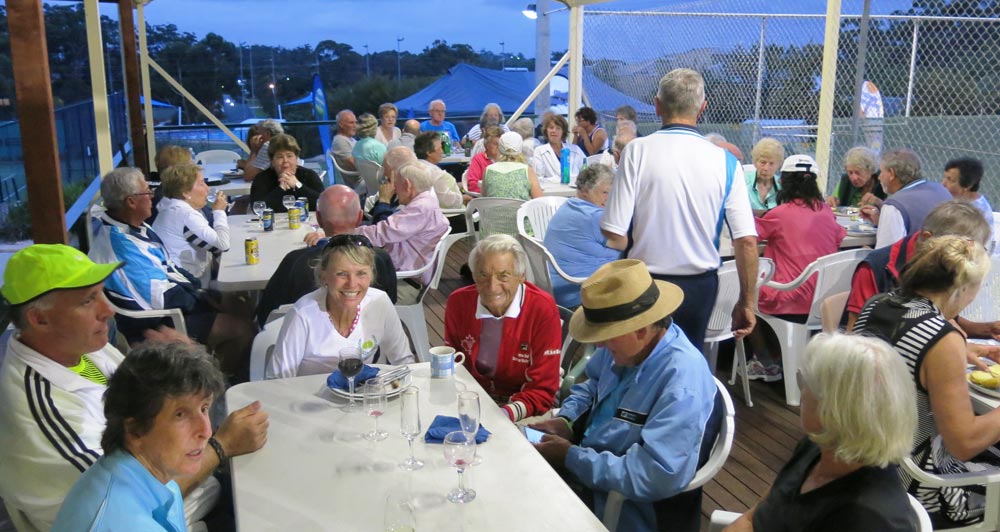 Seniors Tournament the Best Yet

The Ulladulla Tennis Centre in Warden Street was buzzing on the weekend of February 17, 18 and 19 2017 when players from all around NSW, ACT, Victoria and further afield competed in the annual BIG4 Bungalow Park Burrill Lake Seniors Tennis Tournament under the control of tournament director Mary Lou Barclay. President of Tennis NSW Seniors Mick Bruton was the lucky winner of a week’s accommodation for 6 people generously donated by Catherine and Quentin at Bungalow Park on Burrill Lake.
Our most popular event ever saw 220 players enjoying singles, Doubles and Mixed Doubles events in Ulladulla and Milton.
In a very competitive but also social atmosphere teams were grouped according to their age or ability and played a round robin format with a cash prize for the winners and runners up in each group.
The high standard of players included the current world number one ITF ranked doubles lady in the over 65 age group Adrienne Avis-Main as well as ex-local Helen Worland who is currently 22 in the world seniors doubles ranking. They made a formidable pair on the court.
Current and past presidents, secretary and treasurer of tennis Seniors NSW also attended as well as Councillor Patricia White and Deputy Mayor Mark Kitchener.
Thank you in no small measure to Tournament Director Mary Lou Barclay and her assistant Val Crook and to hard-working Canteen managers Jennie Rutherford and Pauline Proctor who only went home to sleep during the three days.

Many of the entrants have represented Australia at an international level where they have been successful in becoming world champions including ladies number 1 ranked doubles player in the 65 plus age group Adrienne Avis-Main. Cheering her on was her new husband Lorne Main who at 86 years of age is Canada’s and the world’s most successful seniors tennis player winning over 40 titles on the seniors circuit in the past 30 years.
While the competition is targeted at visitors, a number of Ulladulla Tennis Club players also participated with many being successful, especially our coach Kevin Murphy who won 2 events – Men’s Singles and Men’s 75 years Combined Age Doubles with David Ridley.
Other locals who did well are:
Deb Loves and Kerri Cassidy who won the 75/110 Ladies Combined Age Doubles;
Geoff Cook and partner, Belinda Arthur from Wollongong, won the 95/120 Combined Age Mixed Doubles.
Paul Woodcock with his partner Elaine Brockett won the 45/65 Age Mixed Doubles.
Lee Dickson and Mike Lynn won the 50/55 Age Mixed Doubles.

The Saturday night barbecue for competitors and volunteers was a huge success with President Keith Bonser advising all the visitors that “If you want to have a great tennis club you need a dedicated and hard-working committee, a great coach and generous sponsors and we are very fortunate to have all three.”
Mary Lou also said “I wish to give a special thank you to the Milton-Ulladulla District Tennis Association committee members and a number of volunteers who helped tirelessly over the three days working in the canteen, cooking the barbeque, serving liquid refreshments, taking photos and doing the heavy lifting and numerous other jobs.”

Congratulations to all involved.

Next year we will celebrate our 20th anniversary and it can only get better.