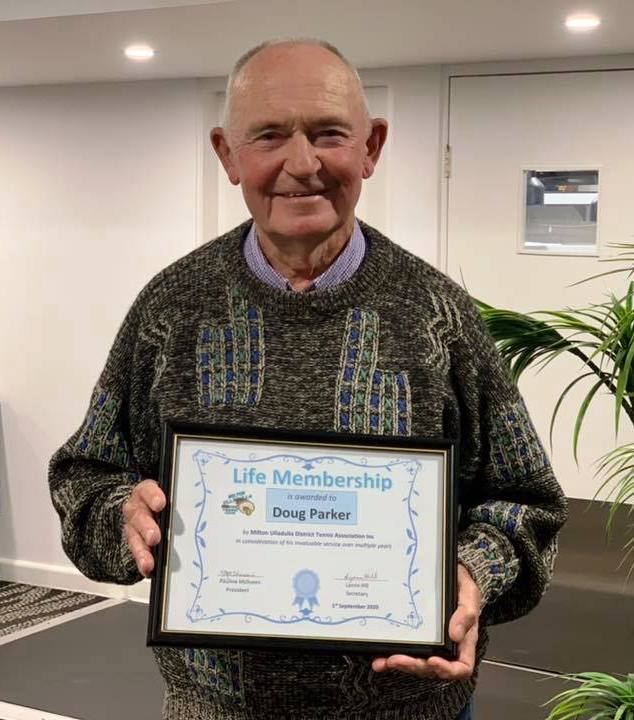 The Milton Ulladulla District Tennis Association would like to announce the granting of Life Membership to Doug Parker.

Doug has been involved with the club since 2003 as a coach, volunteer and committee member. Since then he has promoted the club to junior members through holiday tennis camps, school coaching clinics and the implementation of NSW sanctioned Junior Tennis tournaments.

Doug was MUDTA Vice President from 2006 to 2008 and has currently been a Committee member since 2016.

In 2007 Doug provided supervision of the courts development program which saw an additional 4 courts constructed, enabling the first South Pacific Open tournament to be held in 2008 which he also helped to establish.

Doug has had frequent negotiations with the council for various projects undertaken at the Ulladulla Tennis Centre, including recently scoped out plans to upgrade court lighting to new LED lights for the tennis complex including undertaking quoting arrangements. His knowledge has also been invaluable in advising the committee in several areas including correct fencing requirements with top and bottom rails, type of surface, placement of new courts and preferred contractors.

In the recent past Doug has taken a keen interest in the beautification of the centre – cleanliness, court maintenance, native plants, hedging and gardens, new fencing and centre court improvements. He has also been responsible for establishing social groups playing tennis that continue to fund the club via court fees. He is always a consistent and friendly point of contact with players whether by phone or in person.

The members of MUDTA thank and congratulate Doug for his ongoing efforts and the part he has played in making our Tennis Club the success that it is.